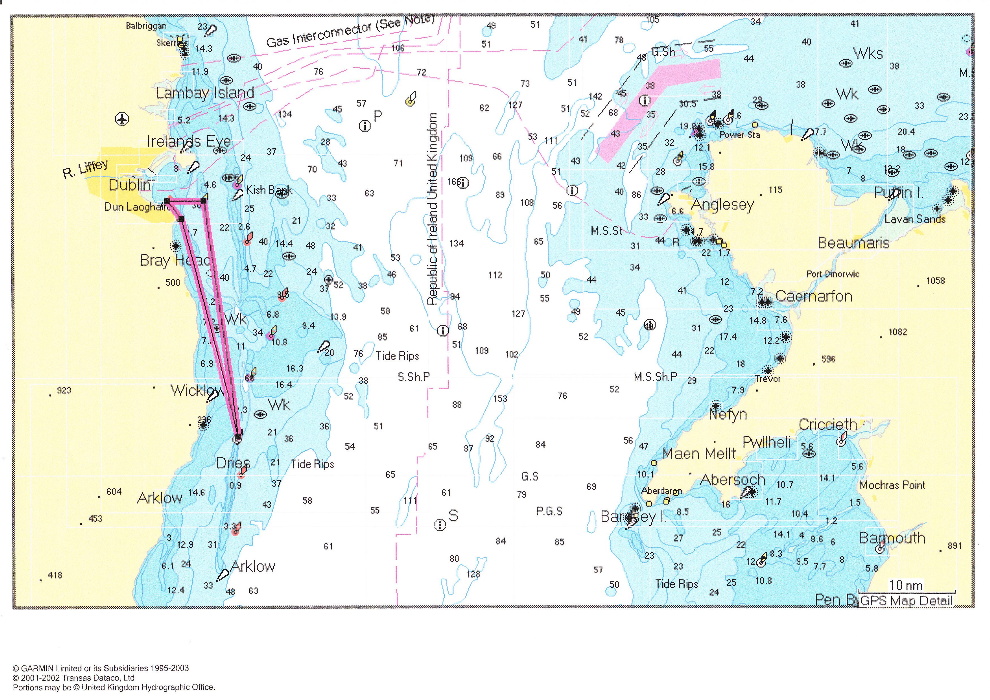 It had been hoped that there would be a bumper fleet out for this popular day race run in conjunction with the Royal Alfred Yacht Club and the Lee Overlay Offshore Series but despite 25 entries, only 15 came to the start line. The heavy offshore race to Holyhead and delivery back the previous weekend and the strong winds all the week since then, had taken its toll with damage to boats and crew and boats not being to get to Dun Laoghaire.

The weather forecast for the day was for wind force 3-5 south east going east. The original course was to go south to North Arklow buoy. However, with the strong spring tides going north at the start and the light winds forecast, the Sailing Committee decided that going north to Rockabill would ensure a finish would be achieved to all boats. The course was: Start – North Burford(P) – Lambay (P) – Rockabill (S) – Lambay (S) – Kish Light (S) – Finish at Dun Laoghaire Harbour (45 miles).

Paul McCarthy of the RAYC provided the start at 10.00 and the fleet set off on a white sail reach towards North Burford. The wind was as forecast, south east force 3-4. Rounding that mark, spinnakers were raised and the fleet sped north with the tide. Shorthy after 12.00 “Lively Lady” rounded Rockabill followed by “English Mick”, “Orna” and directly behind her “Tsunami”.

The leg back to Kish was a beat keeping Lambay to starboard. The wind fluctuated with the stronger wind being out to sea. Most boats tacked behind Lambay to get the benefit of some lack tides in the lee of the island.

The wind was holding as the fleet neared Kish. First round was “Lively Lady” followed by “English Mick”, “Tsunami”, “Orna” and “Jedi”. As forecast the wind backed to east and dropped. What was looking like a charge to the finish turned out to be a crawl. Many of the boats at the back of the fleet gained by a temporary filling of the wind from behind as they caught up with the leading pack. However, “Lively Lady” and “English Mick” held their positions and crossed the line first and second. “Jedi” and “Orna” crept past “Tsunami” to cross the finish.

Sandra Moore of the NYC provided the finish. The usual après sail took place in the NYC after the race.

The next race is the Day Race in Pwllheli on the 14th May. It is hoped that the day race there will attract some new entrants from the Welsh side.