ISORA Series builds to a Cresendo after Race to Pwllheli

The offshore from Dun Laoghaire to Pwllheli at 08.00 on Saturday 6th August attracted 16 boats from the 27 boats entered. Mainly crew availability had forced boats to pull out of the race.

The course for the race was from the Start, direct to the finish with Bardsey Island not being a mark on the course. 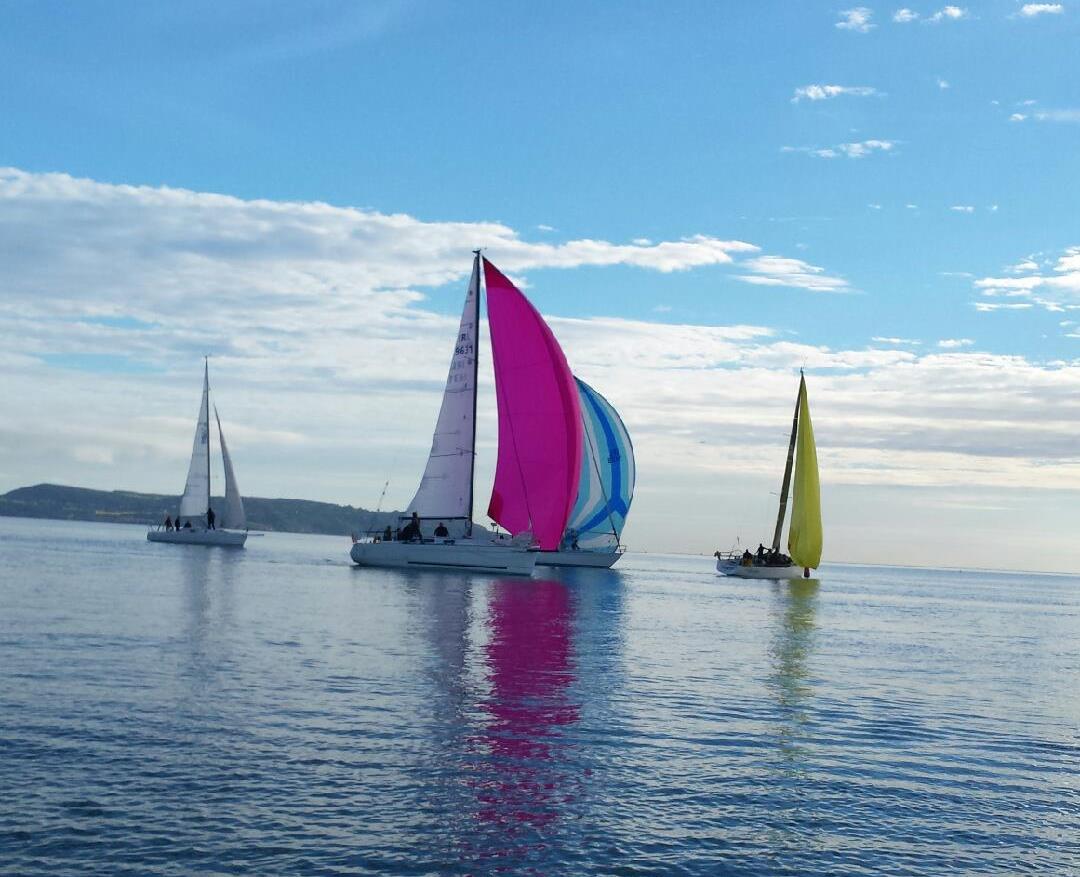 The weather for the race area was for very light winds from the north west at the start in Dublin Bay going calm and then building from the south later in the day. The first part of the forecast was correct as the 16 boats came to the line to be started by NYC Commodore, Larry Power and RATC Commodore, Barry MacNeaney.

There was just enough winds for the fleet to slide over the start line under spinnaker and make their way towards the Muglins. The winds were so light that some boats gybed north towards Howth in an effort to find wind.

Andrew Hall’s “Jackknife” and Christ Power Smith’s “Aurelia” led the fleet towards the Muglins pointing out the massive wind shifts and holes.

By the time that first boats had reached the Muglins the wind had shifted to the south east and increased so spinnakers were swapped for jibs. After rounding the Muglins the fleet set off on a beat towards Bardsey. While most of the fleet tacked east towards Holyhead, others tacked south to attempt to catch the forecasted new wind sooner.

The forecasted southerly wind arrive by mid-morning and was increasing to 18-19 knots. At that stage there was a good spread across the fleet. Despite the spread, the new wind appeared to arrive at all boats at the one time. The advantage the southerly boats had was the ability to sail freer in the building winds. “Jackknife” was the most southerly boat while “Polished Manx 2” took the northerly route.

As the tide turned at mid-afternoon the wind increased to 24-25 knots and the weather deteriorated. Blue skies were replaced with dull overcast and building mist that got worse approaching Bardsey.

As the fleet converged approaching Bardsey “Jackknife” was the first boat through, followed by “Lively Lady”, “Aurelia” and “Sgrech”. The latter boat was followed very closely by “Mojito” and “Ruth”.

At the finish the visibility was very poor but the Pwllheli Finishers, Gerry and Gwen Williams aided by the YB tracker finishing system, managed to record all the boats. “Jackknife” took line honours. Despite “Sgrech” finishing 8 seconds ahead of “Mojito”, “Mojito” beat “Sgrech” by 22 seconds on corrected time to take the race overall and Class 1. “Adelie” took Class 2 and “Windshift” took Silver Class.

Prior to the race the ISORA Champion “Ruth” was leading the series and heading for their “three-in-a-row”. However their 3rd place behind “Sgrech” has changed the top of the table and changed it into a tight six boat possibility. The postponement of the Dun Laoghaire Night Race, which has been postponed until Friday 19th August, will add spice to the series as it could figure in the overall points. One way of the other the Series is likely to be determined on the last offshore of the Series on the 10th September, the LC Tyres Pwllheli to Dun Laoghaire Race.

Full details of the results and the following races can be found on the website.