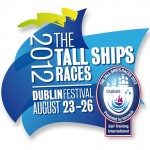 This Regatta will take place between the 26th and 29th August 2012 with a port visit to Dublin from 23 – 26 August and on completion of the Regatta, a port visit to Liverpool from 30 August to 2 September.

The Regatta will not be a straight race between two points. Instead, Captains will be given a series of waypoints and they will choose their own course using these waypoints, the aim being to cover the greatest distance possible in the time allowed. Prizes will be awarded to vessels that have covered the greatest distance calculated by the legs completed between the waypoints given, with the overall distance then corrected with a distance correction factor, a form of handicap used by Sail Training International to enable the great variety of vessels that we have taking part in our races to compete against one another. Captains will be given a full briefing in Dublin prior to departure.

Participation in the Regatta will require vessels to agree to be in the host ports at each end of the event. In the case of Dublin (the start port) vessels must be in port from midday on 23 August until departure in a parade of sail on 26 August. The Regatta will then start on the evening of 26 August. At the end of the Regatta which will probably be sometime on 29 August, vessels must be in Liverpool from midday 30 August until departure in a parade of sail down the Mersey at around 1pm on 2 September. The in-port days will involve crew activities, parties, dinners for the Captains, a crew parade, etc - large crowds of the general public are always attracted to see the vessels.

In order to participate you do not have to have access to or own a Tall Ship like a square rigger! We race in 4 classes as follows:

Class B – traditionally rigged vessels with LOA less than 40m and a minimum waterline length of 9.14m

Class C – modern rigged vessels with LOA less than 40m and a minimum water length of 9.14m, not carrying spinnaker- like sails.

Class D – modern rigged vessels with LOA less than 40m and a minimum waterline length of 9.14m, and carrying spinnaker- like sails.

Any yacht owner or Yacht Club wishing to take this unique opportunity to enter this Regatta will be assured of a warm welcome. A lot more information can be obtained from the Sail Training International website – !www.sailtraininginternational.org – and/or by contacting the office in Gosport and speaking either to myself (the Race Director) or to Janet Gauntlett, the Race Director’s assistant. I am attaching a copy of an Entry Form for the Regatta for your information.

I look forward to welcoming you to this Irish Sea Tall Ships Regatta – our first Irish Entry, already received, is from Cork in the form of a yacht “Spirit of Oysterhaven”. We have also been told to expect an entry from the Irish Navy yacht – Creidne. I very much look forward to further entries from the Emerald Isle.