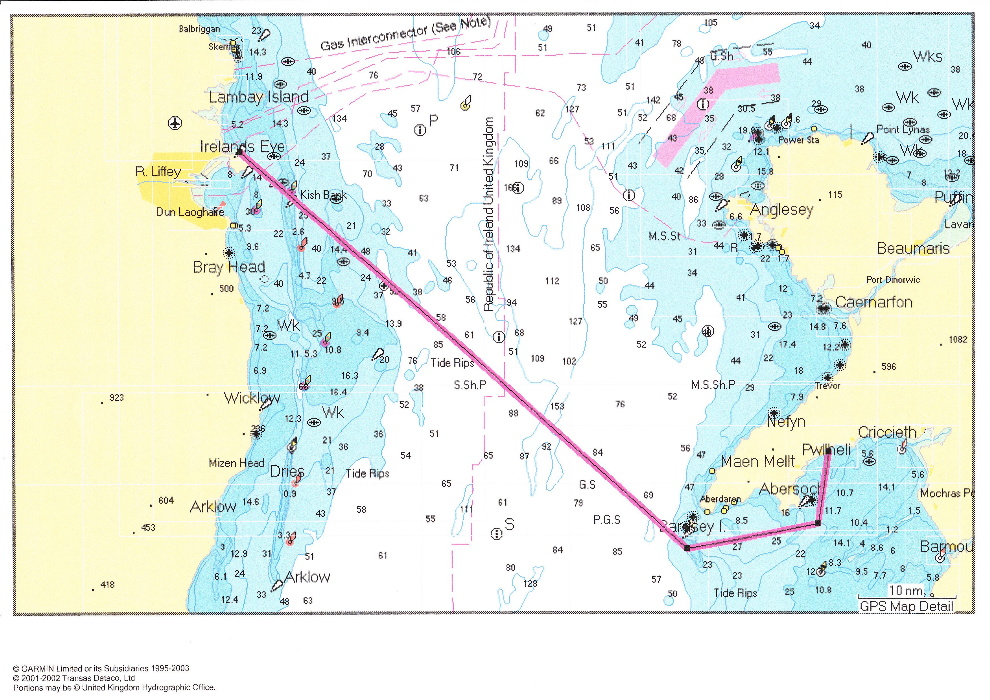 The weather affected what is normally the most popular race of the series, the James Eadie race from Pwllheli to Howth. The severe weather forecast put many boats off travelling to Pwllheli. Some even turned back during the delivery to Pwllheli.

Only nine boats from an entry list of 25 came to the start line for the race. Due to the severe weather forecast it was decided that it would be prudent to shorten the race as much as possible and to change the course to go directly to Dun Laoghaire instead. This gave a course of 74 miles. In view of the overfalls off Bardsey Island, it was decided to remove Bardsey as a mark on the course.

The start was provided by Richard Tudor of the PSC. The wind at that time was southerly and was a steady 25knots. The first leg to St Tudwals was a tight fetch. The fleet encountered the first of the bad overfalls exiting through St. Tudwals sound. The next leg to Bardsey Sound was a tight reach. With the island blanketing the wind, conditions in the Sound were surprisingly tame. “Tsunami” was the first boat through the Sound and they cracked off to a beam reach to Dun Laoghaire.

The wind was building all the time during the race. The winds, on the reach to Dun Laoghaire, were a steady 30+ knots with gusts up to 40 knots. While the race was not a tactical challenge, steering the boat through the rogue waves kept the helms on their toes. With the exception of one boat who ventured a spinnaker, all the boats knuckled down and rode out the weather using white sails.

“Tsunami” led the fleet for most of the race taking line honours. They finished race in approximately eight and a half hours. The remainder of the fleet all finished within 75 minutes. “Tsunami” was pipped for first place by one minute by “Sgrech” and had to settle for 2nd Overall. “Raging Bull” took third place overall, 30 seconds behind “Tsunami”. Class 3 was won by “Mojito” who also took 4th Place Overall.

“Raging Bull” and Matt Davis are the ISORA Overall Champions and the winners of the coveted Wolf’s Head Trophy. They retained their ISORA Champion title for the second year in succession.

The finish was provided by Ronan Kieran of the NYC.

The prizes for the series will be presented at the ISORA Annual Prize Giving Dinner to be held in the NYC on the 19th November.

Earlier that day the AGM will be held to decide the race schedule for the 2012 series. Chairman, Peter Ryan has requested suggestions for the race schedule and has promised a change to the race schedule. He has indicated that the use of coordinate waypoints as marks on the course would allow for a more varied course and would eliminate the long reaching legs that can occur using navigational marks. There have also been invitations from Milford Haven, Arklow and Liverpool Yacht Club to join with them in races as part of the series.