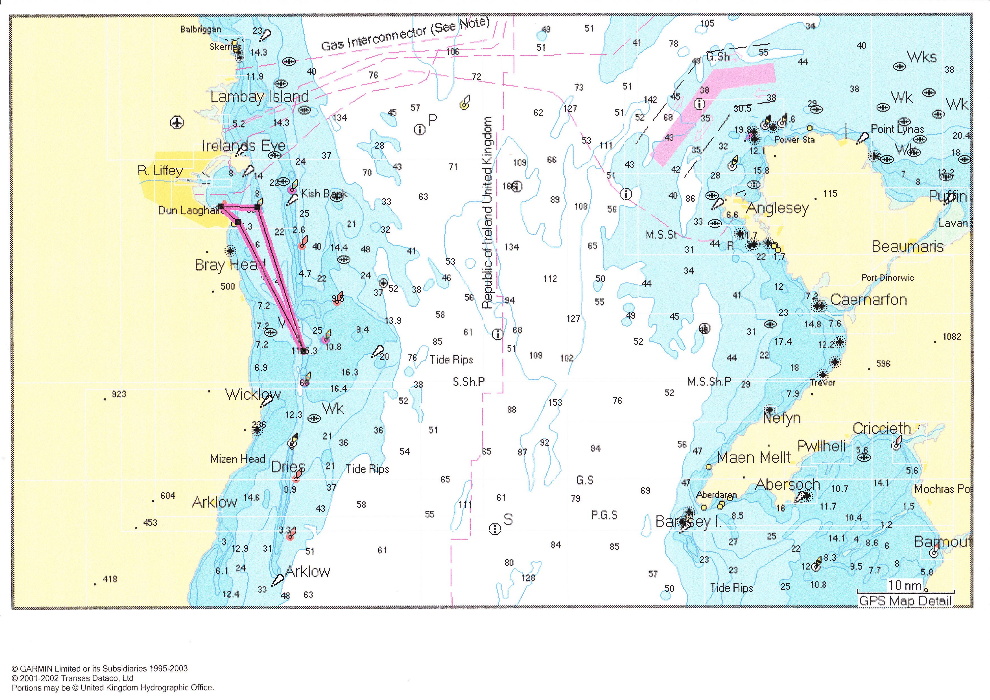 The tide was favourable for the start with three hours left of south going tide. The wind at the start was south-east, 8-10 knots, despite the forecast for north west, This gave a beat to Muglins and on to North India. "Tsunami" and "Jedi" broke from the start and led the fleet of 15 boats out of Dublin bay.

The wind remained steady for much of the beat to North India but as the leaders were within 5 miles on North India the wind decreased and, for a short time, there was no wind. "Tsunami" had gained a strong lead at this point but this was reduced when the forecasted north-west wind filled in and the fleet moved again, starting at the back. At this stage the tide had turned and progress for the last few miles to North India was slow.

"Tsunami" again rounded the North India first with a bunch of six boats close behind. The new wind gave a beat back to the Muglins and the finish. The winds also freshened 10-15 knots but decreased again to 8-10 knots as the fleet approached the finish at the mouth of Dun Laoghaire harbour.

Things are hotting up for the Overall Series - Wolf's Head. There are several boats that have the trophy in their sights with all depending on the last three races.

The next race is on the Sunday 14th August, immediately after the start of the "La Solitaire du Figaro" from Dun Laoghaire. It is hoped to follow the "Figaro" fleet and use this as a "Family day". It is hoped that other Dublin Bay and visitor boats will join in the race and be there for the start of the "Figaro" leg. More about this later this week.

I hope to see you all on the 14th August.

Comments on the race from Brian Berry "Lascar", a recent newcomer to ISORA:

A very enjoyable night out. We were becalmed off Kilcoole with the GPS indicating Zero and were contemplating the anchor but happily Moulditch Buoy was visible and provided a shore transit that showed we were moving at about 10 ft/min, slow but moving in the right direction. That lasted about 20mins and then up came a light northerly so Genny poled out and off we went at a moderate pace. The Spinny was up 15mins later and we bowled into North India at about 6kts SOG. Great stuff, made up for taking over 6hrs to travel 17 miles!

The beat back was straightforward but I think we should have gone way beyond the Kish before tacking in, there were arguments about the contrary effects of Dublin Bay tides "far-out" and "close-in" that may have slowed us down beating from the Muglins to DL, I don't know. Are there any stream charts relating to the Bay that could be usefully added to the armoury (none of us has ever raced in the Bay before)?