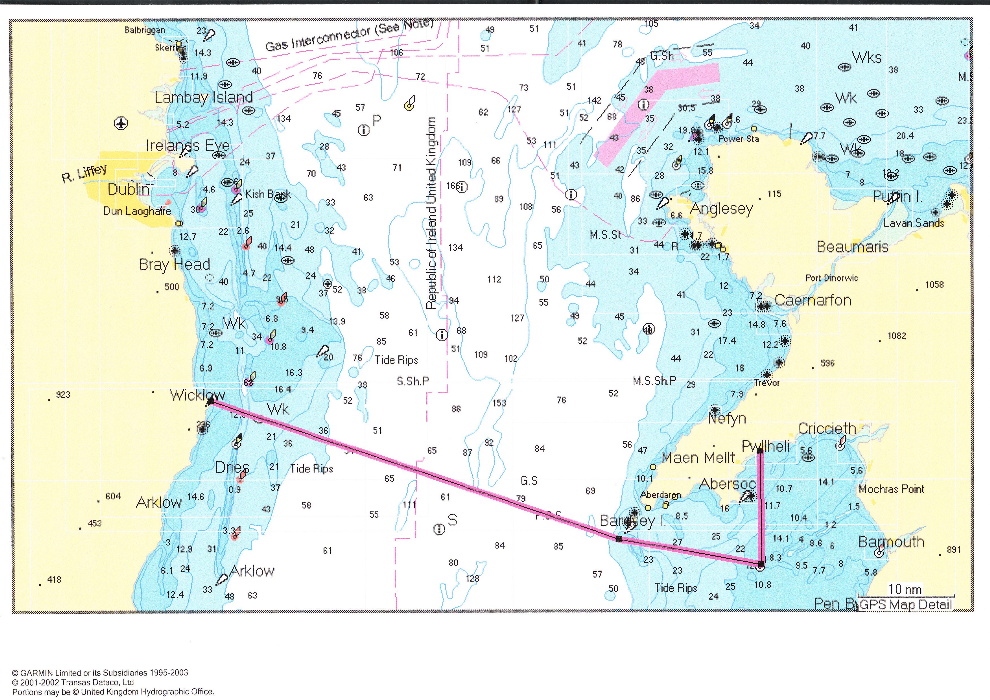 The weather was not fair for boats considering the delivery to Pwllheli for the start of the race. Gales for days before had taken its toll on some proposed entrants. A weather window opened early on the Friday morning allowing most boats to head to Pwllheli. However, this window closed later that day causing at least one boat to turn back. Another clash with a “rugby match” also took its toll on entrants. As a result only 13 boats came to the start on Saturday morning.

The weather forecast for much of the UK and Ireland was terrible for Saturday. However, on Friday night “Windfinder” weather website was showing a band of slacker winds extending from Holyhead down to Milford Haven and extending across to Wicklow – perfect for the race!! Confidence in the weather forecast quickly eroded as crew arose on Saturday morning to the sound of strong winds whistling through the rigging of boats in the marina.

The weather forecast in the “favoured band” for the day was for wind 15-20 knots south-west going west. The original course was PSC No.3 (P) - Causeway (S) – Bardsey (S) – North India (P) and to the finish in Wicklow. However, with the strong winds in the area and the likelihood of a beat for most of the course, the Sailing Committee decided to eliminate Causeway and the shorten the last leg by rounding South India instead of North India.

The race started at 08.15 with a beat to PSC No.3 and continuing with a beat to Bardsey. The wind had dropped as forecast and varied from 15-20 knots but the seas were particularly bad at St. Tudwal’s Island and at Bardsey.

“Sgrech” was the first to round Bardsey followed by “Tsunami” and closely followed by “Aztex” and “Jedi”. The leg to South India was a tight reach and the wind continued to rise and fall between 10 and 20 knots, but stayed in the south-west. “English Mick” rounded South India followed by “Tsunami” and it was a full beat against the tide to the finish. Followed closely behind “Tsunami” in a bunch was “Raging Bull”, Aztec”, “Jedi” and “Sgrech”. Behind this came the next closely bunched “Lula Belle”, “Mojito” and Dinah”. The remaining boats came to the finish also in a bunch.

On the social side, a great night was had in Pwllheli on the Friday. A busy Wicklow Sailing Club also provided a BBQ for the finishers.

The boats that made the start were rewarded with fine weather and great close sailing within the Classes.

For full results of Race 4 and the Series after four Races, click on the links below:

Photographs from the Start: